Advances in the precision and the temperature range of experiments at surfaces and interfaces have led to a wealth of new science over the past few years. In particular the ability to use the whole breadth of organic synthesis for the creation of specific molecules and molecular epitaxy as well as surface engineering to modify the physical properties of the molecular systems practically at will have expanded the range of results dramatically. This development, it turns out, leads to a huge variety of experimental results which is sometimes hard to assign to a particular effect or property. Here, theoretical simulations, which have also substantially improved over the last years, turn out to be essential. We shall, on a number of model systems and for a number of effects like Kondo resonances, vibrations, chiral adsorption, and molecular rotations show that this variety and precision make it possible today to use molecular interfaces like lab benches and to perform detailed experiments on individual electrons and spins. 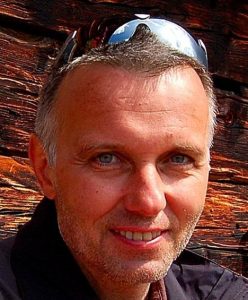 He holds a master degree in Engineering Physics from the University of Technology, Vienna, and a PhD in Condensed Matter Theory from the same University. Prof. Hofer is internationally known for his work on the nanoscience of surfaces and interfaces, and has worked for nearly twenty years in this field with international collaborators in China, Canada, the US, and Europe. He is also known for his work on fundamental physics, in particular electron theory and foundational aspects of quantum mechanics.

From 1999 to 2002 he was research assistant and research associate at University College London, from 2002 to 2014 he was Lecturer, Reader (2005) and Professor (2006) in the Department of Chemistry at the University of Liverpool. He was awarded a Royal Society University Research Fellowship in 2003, which he held until 2011. From 2007 to 2013 he was an international member of the Canadian Institute for Advanced Research, participating in research on nanoelectronics. Since 2014 he was Professor of Chemical Physics at Newcastle University. His editorial roles include member of the editorial board of Journal of Physics (2005-2008), Editor of the Elsevier journal Surfaces and Interfaces (2016-2017).

In 2010 he became Founding Director of the Stephenson Institute for Renewable Energy at Liverpool University, which he led until 2014, building up the institute to its current strength of 60 researchers and a portfolio of more than £30m in research funding. In 2014 he became Dean of Research and Innovation in the Faculty of Science, Agriculture, and Engineering of Newcastle University, contributing substantially to the eventual restructuring of the faculty into four, instead of ten schools in 2017. He resigned as a dean with effect from June 2018 to focus on his research, in particular the development of new methods to efficiently simulate systems composed of millions of atoms.

In the last three years he held a distinguished visiting professorship of physics at the University of the Chinese Academy of Sciences in Beijing.

Prof. Hofer has published more than hundred articles on the nanoscience of surfaces and interfaces1. He has also published a textbook on SPM theory and application with Adam Foster2. In the last ten years he has published a number of articles on a new two-density model of electrons3-6, which also is the topic of a popular science book published in Mandarin by Science Press, and which was released in December 20217.

5T Pope and W Hofer, A two-density approach to the general many-body problem and a proof of principle for small atoms and molecules, Frontiers of physics 14, 1-8 (2019)

Interaction of small molecules on the ZnO surface