Single-Atom Alloy Catalysts: Born in a Vacuum, Tested in Reactors, and Understood In Silico

Single-Atom Alloy Catalysts: Born in a Vacuum, Tested in Reactors, and Understood In Silico 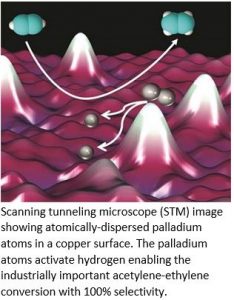 In this talk I will discuss a new class of heterogenous catalysts called Single-Atom Alloys in which precious, reactive metals are utilized at the ultimate limit of efficiency.1-6 These catalysts were discovered by combining atomic-scale scanning probes with more traditional approaches to study surface-catalyzed chemical reactions. This research provided links between atomic-scale surface structure and reactivity which are key to understanding and ultimately controlling important catalytic processes. In collaboration with Maria Flytzani-Stephanopoulos these concepts derived from our surface science and theoretical calculations have been used to design Single-Atom Alloy nanoparticle catalysts that are shown to perform industrially relevant reactions at realistic reaction conditions. For example, alloying elements like platinum and palladium with cheaper, less reactive host metals like copper enables 1) dramatic cost savings in catalyst manufacture, 2) more selective hydrogenation and dehydrogenation reactions, 3) reduced susceptibility to CO poisoning, and 4) higher resistance to deactivation by coking. I go on to describe very recent theory work by collaborators Stamatakis (UCL) and Michaelides (Cambridge University) that predicts reactivity trends for a wide range of Single-Atom Alloy combinations for important reaction steps like H-H, C-H, N-H, O-H, and CO2 activation. Overall, I hope to highlight that this combined surface science, theoretical, and catalyst synthesis and testing approach provides a new and somewhat general method for the a priori design of new heterogeneous catalysts. 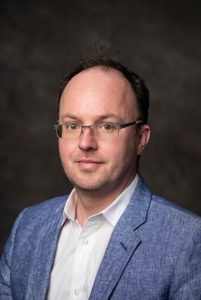 Dr. Sykes is the John Wade Professor of Chemistry at Tufts University. He got his B.S. and M.S. from Oxford University before moving to Cambridge University for a Ph.D. under the supervision of Professor Richard Lambert. He then relocated to the U.S. for a postdoctoral fellowship with Professor Paul Weiss at Penn State before starting his independent career at Tufts University in 2005. Sykes has been named a Beckman Young Investigator, Research Corporation Cottrell Scholar, IUPAC young observer and the Usen Family Career Development Professor. He was also the recipient of a 2009 NSF CAREER award, a 2011 Camille Dreyfus Teacher-Scholar Award and the 2012 AVS Peter Mark Memorial Award. Charles received the Young Talented Scientist Award at Chirality 2014 and was named a Fellow of the Royal Society of Chemistry in 2015. In 2018 Prof. Skykes was named a Fellow of the AVS and, together with Maria Flytzani-Stephanopoulos, was awarded the 2019 ACS Catalysis Lectureship for the Advancement of Catalytic Sciences. He is the author of over 160 peer-reviewed publications and has given over 165 invited talks at conferences and universities.

Interaction of small molecules on the ZnO surface